Now a pro, Wynder credits Academy Cup experience with getting 'you ready for the next level'

Looking forward to the burgeoning pro career of an USL Academy alum. 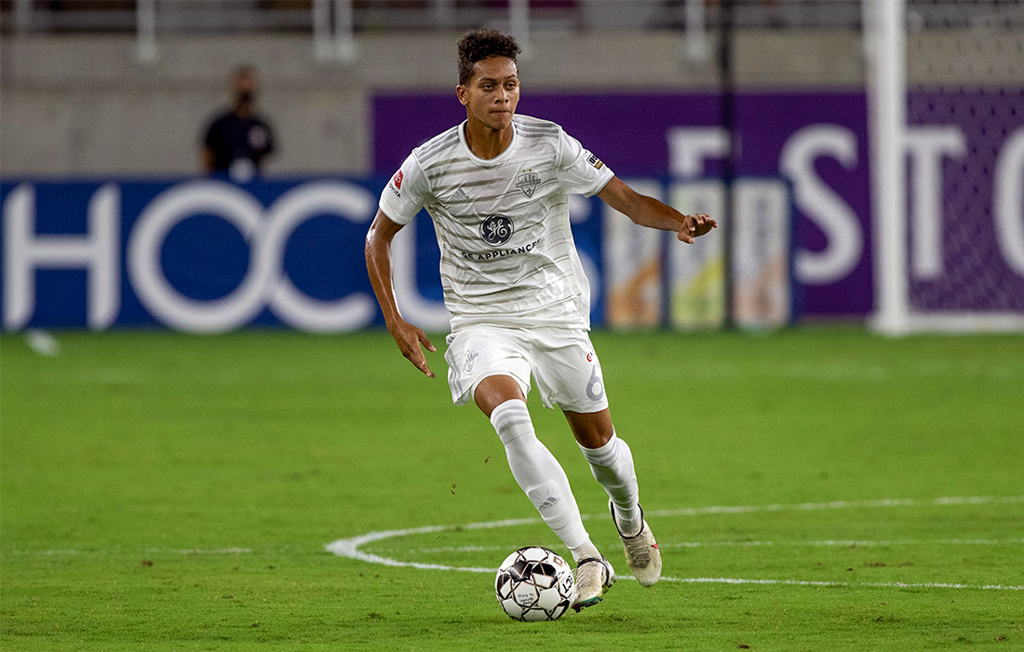 The United Soccer League (USL) hosted its first Academy Cup regional events in 2019 and early 2020, which saw 26 clubs from across the three USL divisions represented in the inaugural competition. Among these clubs were a collection of the best youth players from around the nation, showing off their skills on the pitch in hopes of advancing their soccer careers. For Elijah Wynder, Francis Jacobs, Raymond Drai and Leo Torres, the structure of the USL Academy platform helped provide just that as they’ve all taken major steps forward in their pro playing careers since participating in their first USL Academy Cup events.

At 16 years and two months old, Wynder became one of the youngest documented players to appear for a professional side in U.S. Open Cup history when signing on with USL Championship’s Louisville City FC on May 16, 2019. Wynder made history as LouCity's first USL Academy signing and competed for the club at the USL Academy Eastern Conference Regional Event in February 2020. While training and competing with the Louisville City FC first team on an Academy contract, Wynder starred as a junior at Louisville Collegiate, tallying 24 goals and 12 assists and earning Boys Soccer Player of the Year honors at the Courier Journal Sports Awards. After representing LouCity at the USL Academy Eastern Conference Regional Event, Wynder rejoined the club's first team. He made his USL Championship debut on August 15, 2020 as a substitute in a victory over Loudoun United FC. In his time on the field, he finished with one shot on target and 100 percent passing accuracy.

“I feel like the competition there [2019 USL Academy Cup] was a lot better than you can get locally,” said Wynder. “It definitely gets you ready for the next level knowing that you could potentially get in a game even though you’re not technically a professional player. It is something great to have in the back of your mind. It gives you something to work toward.”

As another 2019 Academy Cup standout, Francis Jacobs at just 14 years old became the youngest male soccer player to sign a professional contract with the USL Championship’s Orange County SC in August 2019. Jacobs joined Orange County following a successful stint with the Irvine Strikers, where he earned a national team call-up with both the United States U-14 National Team and as a participant in the 2018 U.S. Junior National Team camp. Jacobs made one start and two appearances for Orange County SC in 2020, playing a total of 67 minutes in the first season of his career. Most recently, the now 15-year-old midfielder has been rumored to be joining his former Orange County teammate Aaron Cervantes at the Scottish club Rangers FC. The potential move would make sense on paper as Jacobs spent time with the Rangers’ Academy team playing for the club’s U-16 squad at the Al Kass International Cup in Doha, Qatar through a partnership between Orange County and the Rangers. He had also previously spent time training with German sides Bayer Leverkusen and FC Cologne, as his aspirations of making it to Europe have never been a secret.

"My academy experience was unlike anything I had been a part of,” said Jacobs. “It truly helped my game and further instilled a pathway at Orange County SC for me and others in the academy."

Leo Torres rounds out the impressive line of players making the jump from academy leagues to pro, signing his first professional contract with USL Championship’s San Antonio FC (SAFC) in February 2019. Upon his signing, Torres became the first full-time SAFC Pro Academy player to sign with the first team and was the youngest professional signing in USL Championship history at the time -- at 15 years and 23 days. Throughout his time with the SAFC Pro Academy, Torres was called up to the U.S. Youth National Team on two occasions, most recently representing the U-15 National Team at the Torneo delle Nazioni in Italy in 2019. The 17-year-old made his professional debut on May 14, 2019 in the U.S. Open Cup second round versus the Laredo Heat, playing 14 minutes as a second-half substitute. Torres finally made his USL Championship debut last season, playing in two matches over the course of 2020. As of today, Torres remains the youngest player to ever play in a professional match for San Antonio FC. The San Antonio native is one of six SAFC Pro Academy products to have debuted professionally for the SAFC first team, in addition to Ethan Bryant, Jose Gallegos, Carson Price, Josh Ramsey and Fabrizio Bernal.

“Playing in the academy since I was 12 years old really helped my development,” said Torres. “I kept competing through the age groups and developing to the point where the first team asked me to train. My time playing with the SAFC Pro Academy in the DA and USL Academy events helped prepare me for the professional environment. Our system in the academy is very similar to the system with the first team. We play the same style, always competitive and always wanting to win. Obviously the speed of the game and quality of the players is so much different in the professional environment, but my time with the academy helped me get ready for that.”

The addition of four Academy-born players marks a new wave of teenage signings to professional contracts straight from the youth ranks. As the USL Academy prepares for its inaugural league season and the 2021 Academy Cup, the Academy platform hopes to see more growth in player development and an enhanced transition from Academy League to first team debuts. The addition of a USL Academy League team to the USL club platforms provides each USL club with the ability to develop a pipeline of talent internally within their programs and regions. In doing so, USL clubs will provide a much-needed pathway in the American soccer system, which provides youth players with the opportunity to grow their game right here in the States.

To learn more about the upcoming USL Academy League season and the 2021 Academy Cup, visit www.usl-academy.com.