Both were promoted from within on the first team and academy. 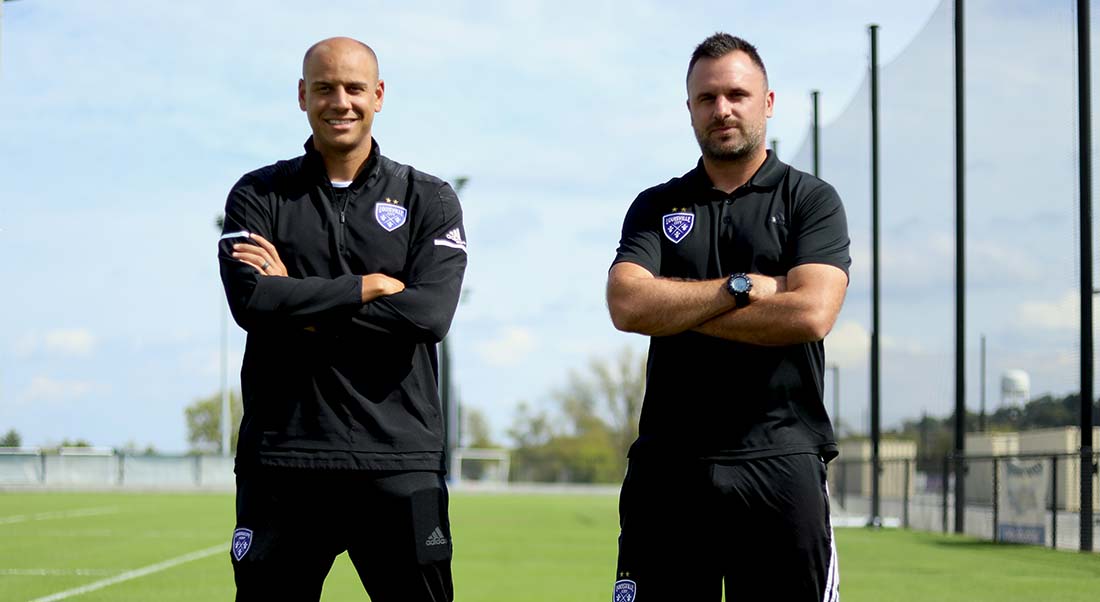 Louisville City FC has promoted from within to fill a pair of key positions on its first team and youth academy staffs.

Following the appointment of Danny Cruz as head coach, former LouCity academy director Simon Bird — who had been serving as Cruz’s top assistant on an interim basis — will take on the role full time moving forward.

Bird’s move up made way for club legend Luke Spencer to advance into the role of LouCity academy director less than a year after retiring after a decorated career on the pitch.

“Simon’s been extremely important to what we’re doing here since day one,” Cruz said. “I have full trust and faith in him. He’s done an excellent job with his roles and responsibilities. He connects well with the players. He’s an important part of the culture, and we’re excited to have him on staff.

“As for Luke,” Cruz added, “he and I still have a really close relationship. We’re constantly talking about the players who have the ability to come up from the academy, and that integration is really important. I’m proud of how this club believes in promoting its own, and I look forward to working more with him.”

A native of England, Bird starred collegiately from 2001-2004 at the University of Louisville, where he was named Conference USA Player of the Year in 2003. He went on to a six-year pro career abroad before returning to the United States to serve on the Cardinals’ staff from 2009-2012.

Bird became a fixture on the local soccer scene in recent years, working as the Oldham Soccer Club’s director of coaching and Kentucky Fire Juniors boys director before gravitating to LouCity’s academy for its launch.

Bird, who holds an A License from the U.S. Soccer Federation, will serve under Cruz alongside goalkeepers coach Scott Budnick.

“I really enjoyed my time helping build the academy from scratch,” Bird said. “Now I’m delighted to have the opportunity to work with this group of guys. I have always had ambitions and dreams of coaching professionally. I’ve bounced around a bit, and those experiences have really helped build me as a coach.”

Spencer spent four years in purple, joining LouCity in 2017 as it won back-to-back USL Championship titles, scoring the lone goal in the 2018 final win. He numbered 28 goals and 11 assists overall in 104 club appearances.

Coaching always seemed inevitable for Spencer, who served as an assistant for alma mater Xavier University while healing up from a knee injury. He also helped run LouCity’s first team alongside teammates Paolo DelPiccolo and George Davis IV during a 2018 coaching transition.

“I’m incredibly grateful for the trust that this club continues to have in me,” Spencer said. “It’s a privilege to be able to lead and develop the coaches and players within our academy. While I will always miss competing with the LouCity first team, it’s been an enjoyable transition due to the special people in our organization. I’m looking forward to building on what has been an exciting and successful first year for our academy.”

A corresponding search for a new assistant LouCity academy director will begin immediately.

“As a club, we always want to provide a growth pathway for all of our members, and that includes our players and our staff,” said Mario Sanchez, who oversees both the LouCity and Racing Louisville FC academies. “We are excited for the new opportunities for Simon and Luke. Simon has played a huge part in the success of the boys academy, and now he gets the opportunity to continue his career with our first team.”

“We are very fortunate to have Luke become our boys academy director. Luke, who is LouCity through and through, has quickly proven himself to be a great leader both on and off the field. With Luke stepping into this role, we will not lose a beat and we will continue to provide our academy players a great experience and a pathway to our LouCity first team.”